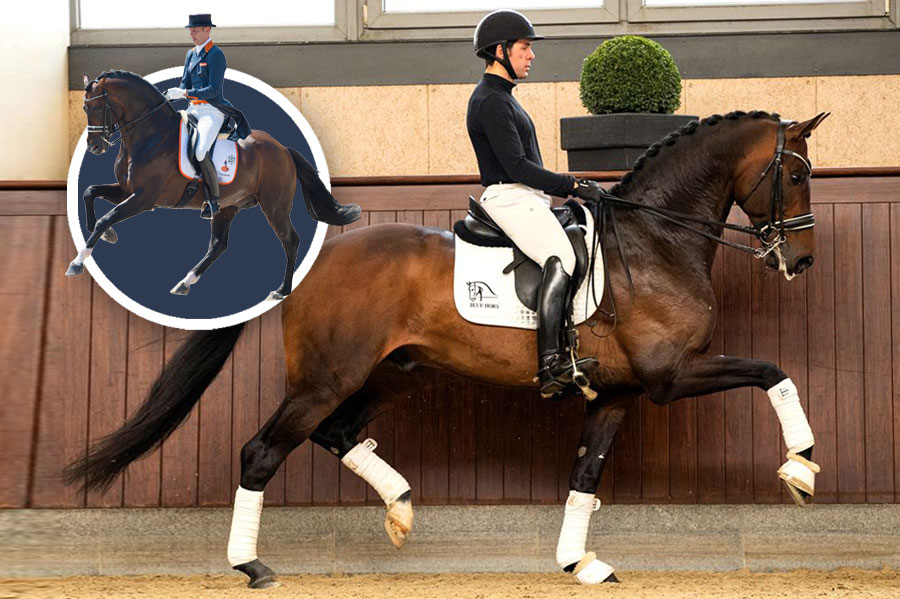 Embryo out of the full-sister of Olympic GLOCK's Johnson TN

SIRE
Premium champion at the Oldenburger Verband, gold medalist at the Danish Warmblood Stallion Show and vice-champion during the Danish Championships for four-year-olds with a score of 9.46! Blue Hors Zackerey is the future talent by the great Blue Hors Zack. Blue Hors Zack was successful at the highest level with the Danish rider Daniel Bachman Andersen. They won several Grands Prix, a world cup qualification and they participated in both the World Equestrian Games of Tryon and the European Championships of Rotterdam, two times realizing the best Danish score.

DAM
Djo Ter Kwincke is a full sister of no one less than GLOCK’s Johnson TN, not an unfamiliar name in dressage to say the least. For years, he formed a combination with Hans Peter Minderhoud and together they competed in all the big championships. They obtained a gold team medal and individual bronze at the European Championships of Aachen and participated in the Olympic Games of Rio de Janeiro. His full sister shares the same genes, bears the elite predicate and proved herself at Z2-level. Her dam Roxane (s.Flemmingh) performed at the same level and produced, besides Djo ter Kwincke and Johnson, several other top performing offspring, including the Inter II-horse Davidoff ter Kwincke (s.Jazz) and the Small Tour-horses Icon Begijnhoeve (s.Apache) and Divo (s.Washington). Another close relative is the KWPN-approved stallion Just For You (s.Uthopia).

The buyer of this lot will also have to buy the mare along with the pregnancy for an additional EUR 3.000,- (excl. 9%).