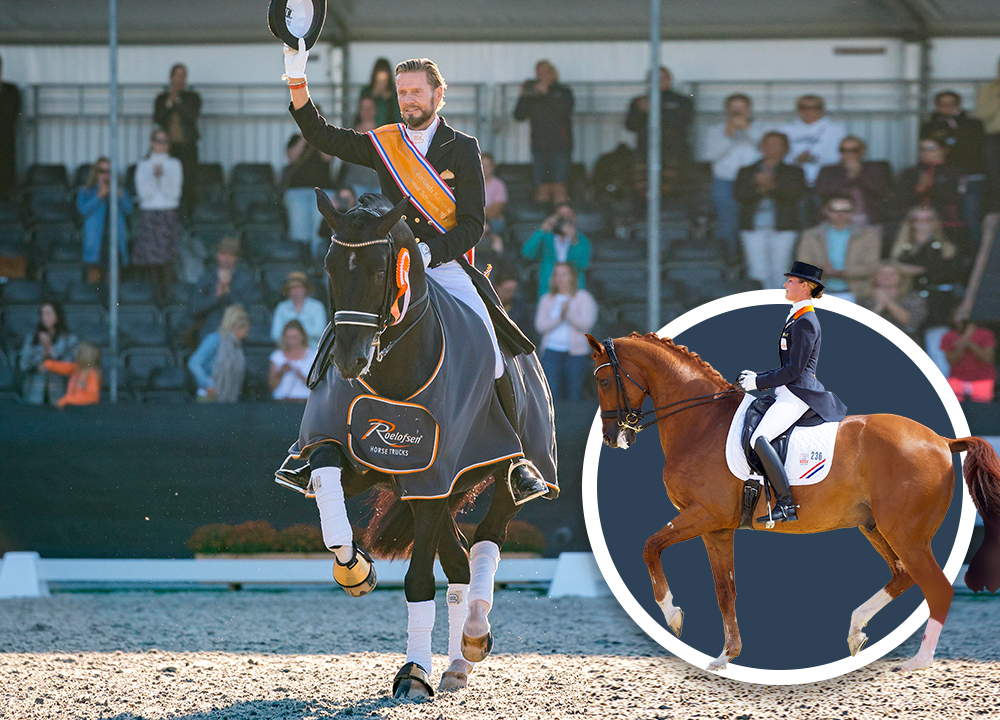 Glock's Toto Jr. x Bordeaux out of the full sister of Parzival

SIRE
Coming star Glock's Toto Jr. never disappoints. Approved in Hannover, KWPN approved, stallion competition winner and now belonging to the 80+% club in the Grand Prix with his rider Edward Gal. Toto is the heir to the throne for Gal who, after all the successes with Totilas, now has a son of the same caliber. Also in breeding, Glock's Toto Jr. seems to become of great value. From his first crop several quality sons have already been approved and certainly under saddle his offspring is remarkable!

Besides the blood of Totilas we also find German dressage talent Desperados in the pedigree. This De Niro son won a series of medals at Olympic Games, European and World Championships under the saddle of Kristina Sprehe. In the dam line of Glock's Toto Jr. we also see several notable Big Tour horses and approved stallions.

DAM
A daughter of Bordeaux from the full sister of Parzival! This genetic masterpiece brings together all the elements of top sport. Bordeaux has broken through as a top-class sire with several horses such as Rose of Bavaria with Laura Tomlinson, Bonheur de la Vie, at the age of 8, recently won the Louisdor Final by force majeure, under the saddle of Sandra Nuxoll. But of course also Bohemian who will compete for medals under Cathrine Dufour in the coming years is a son of this superb stallion.

We see something very special in this dam line. Hardly anywhere you will find so much top sport horses so closely related. First of all we go to the flagship horse of this dam line, Olympic silver medal winner Parzival. For years he was the Dutch best combination with many victories and multiple gold medals at the major championships. Full brother Fleau de Baian is now also successful at Grand Prix level, and their sibling, the KWPN stallion Governor (s. Totilas) is on his way to the highest level. All three under the saddle of Adelinde Cornelissen. If we look further in this dam line we see more Big Tour horses: Brittany-STR, Genoa TC and also TC Athene who was European Champion at the Young Riders and U25 Grand Prix under the saddle of Jeanine Nieuwenhuis.

This pregnancy leaves nothing to be desired. Topsport in every fiber and success horses in every generation